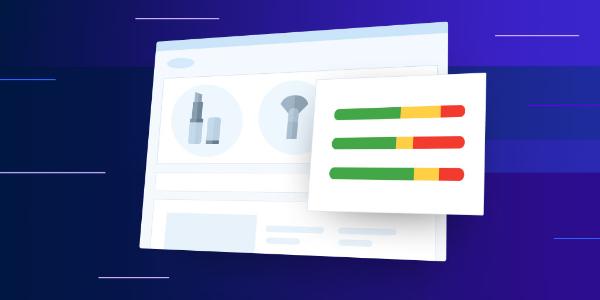 In 2021, Google introduced Core Web Vitals, three criteria to measure if a website is fast, stable, and responsive enough to give visitors a good digital experience. These factor into search ranking and have a powerful influence on customer behavior. But while Google has been urging the web performance community to get on board for more than two years, many are still falling short.

We pulled data from the Chrome User Experience Report to conduct our own Core Web Vitals analysis, finding that even some of the largest e-commerce brands aren’t passing these thresholds.

In March 2022, an assessment of 1.8M prominent URLs across sectors found that only 38% were passing all Core Web Vitals. Google’s standards are clearly extremely challenging for even the most successful global businesses, but they’re also critically important as user expectations rise and attention spans get shorter.

For this report, we narrowed the scope down to the e-commerce sector, specifically health and beauty sites, as this is one of the largest and fastest-growing e-commerce subcategories. We collated and analyzed the Core Web Vitals data of 10 leading sites over a two-year period, to understand how the e-commerce industry is doing, how scores are trending, and identify what the best- and worst-scoring sites have in common.

This is part one of our findings, where we present an overview of key takeaways and analyze LCP for 10 e-commerce leaders. In part two, we wrap up with FID and CLS.

Need a full primer on Core Web Vitals and how to improve them? Grab our free Developer’s Guide to Core Web Vitals for your complete toolkit, including an actionable workflow and a comprehensive list of optimization techniques.

In this post: * Overview of industry findings * LCP: Highest scorers * LCP: Lowest scorers * Getting your scores and taking action

Across metrics: For the 10 e-commerce sites we analyzed, there was an obvious disparity between the attainability of the three Core Web Vitals. The industry average didn’t meet the 75th percentile threshold for Largest Contentful Paint (speed) or Cumulative Layout Shift (stability) on either desktop or mobile, while all sites performed strongly for First Input Delay (responsiveness) on both desktop and mobile.

Some optimization techniques and technology choices were very consistent across all sites:

How do I find my scores and start improving my Core Web Vitals?

The quickest and easiest way to grab your baseline scores is just by dropping your URL into PageSpeed Insights. You’ll immediately get a “Pass/Fail” overview and a breakdown of your performance for each Core Web Vital, as well as a list of “opportunities”. To monitor, diagnose and improve your scores on a lasting basis, you’ll want to consider investing in Real User Monitoring (RUM). You can jump into a free 14-day trial to see how RUM works and start seeing real-time data from your users. Get Alerted to mission-critical issues directly in Slack
Aug 24, 2022
END_OF_DOCUMENT_TOKEN_TO_BE_REPLACED

How to connect code to customer - A deep dive into customer-centric monitoring
Apr 18, 2021
END_OF_DOCUMENT_TOKEN_TO_BE_REPLACED