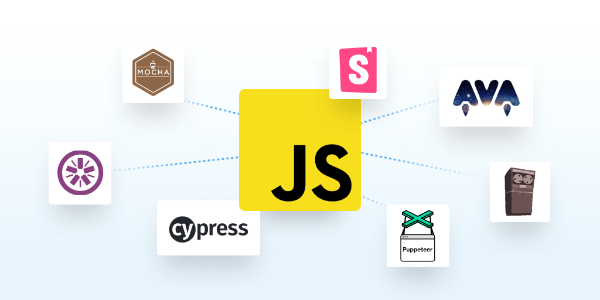 Unit tests are great for peace of mind and reducing software errors. You should always make the time to test.

But which framework should you choose for your project? We examined 11 of the most popular JavaScript unit testing frameworks according to stateofjs.com, to help you decide which is best for you.

Stateofjs collects data from thousands of front-end developers in its annual surveys. Here’s their most recent ranking of most popular JS testing frameworks, sorted by their usage. We’ll go over them one by one, and try to understand their pros and cons. 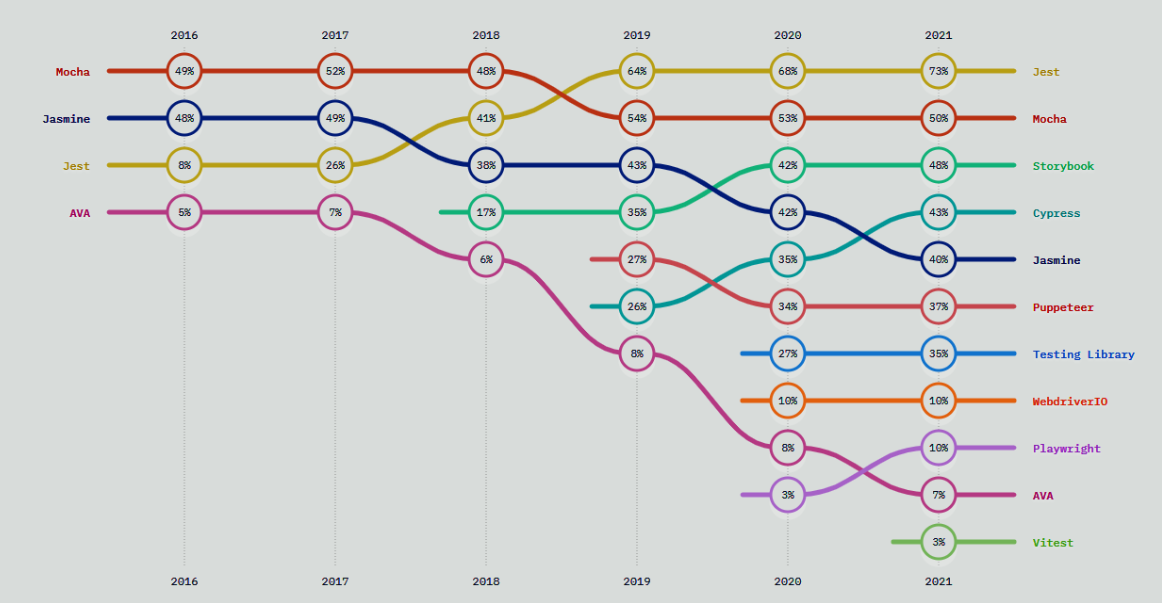 JavaScript moves fast, but JavaScript developers move even faster! As JavaScript keeps evolving, new tools are introduced and may outperform their ancestors. That’s why we should always keep an eye on the changes and choose the framework that fits best in our development process.

Used and recommended by Facebook, Jest is officially supported by the React dev team. If you’ve been a programmer even for just a couple of years, you’ll understand how important it is to choose a framework with a strong community and active support. When a tool is also backed up by a giant like Meta, there’s considerable extra comfort and peace of mind. This simply means if you run into a problem and couldn’t find a solution in their comprehensive documentation, there are thousands of developers out there who could help you figure it out within hours – if not minutes.

The second most-used library, Mocha is only a test framework and provides developers with just the base test structure. Mocha was designed originally to work with Node.js, but today works on a large range of frameworks – including front-end frameworks such as React, Vue, and Angular, as long as you are willing to get your hands dirty with a bit of config.

It does not support assertions, spies and mocks out of the box but it’s possible to add these functionalities with add-ons/plugins. The most popular choice of assertion library to pair with Mocha is Chai, but other options are Assert, Should.js and Better-assert.

Unlike other JS testing frameworks, Storybook is more of a UI testing tool. It provides an isolated environment for testing components. Stories make it easy to explore a component in all its variations, regardless of its complexity. That means stories are a practical starting point for your UI testing strategy. You already write stories as a natural part of UI development, testing those stories is an easy way to prevent UI bugs over time. Storybook also comes with tools, test runners, and handy integrations with the larger JavaScript ecosystem to expand your UI test coverage.

There are multiple ways you can use Storybook for UI testing:

It’s tough to directly compare Storybook to our other testing frameworks, so if this sounds useful for your project, we’d encourage you to do a bit more research of your own.

Cypress works entirely in a real browser (Chrome, Firefox and Edge) without the need for driver binaries. Automated code and application code share the same platform and give you complete control over the application under test. Cypress is best known for its E2E (End to end) testing capability, meaning you can follow a pre-defined user behavior and have this tool report potential differences each time you deploy new code.

Jasmine is a popular testing framework which is famously used as a behavior-driven development (BDD) tool. BDD involves writing tests before you write the actual code (as opposed to Test driven development (TDD)). Although Jasmine isn’t just for writing JS tests, and can also be used by other programming languages like Ruby (via Jasmine-gem) or Python (via Jsmin-py), it has lost some of its popularity over the years. It’s DOM-less, which means it does not rely on browsers to run.

Puppeteer is a Node library developed by Chrome’s Development Team. It’s a framework for test execution, that enables users to control a headless Chrome. Everything you can do manually in a browser can be also done with Puppeteer.

Since Puppeteer is a headless but full-fledged browser, it’s an ideal choice for testing UI of Single Page Applications (SPAs).

React Testing library is not a test runner like Jest. In fact, they can work in tandem. Testing Library is a set of tools and functions which help you access DOM and perform actions on them, ie rendering components into Virtual DOM, searching and interacting with it.

In some ways, Jest and other traditional testing frameworks aren’t comparable with Testing Library. You need Jest in order to be able to collect all the test files with.test.js extension, run each, and show pass/failed results. It’s more accurate to compare Testing Library with Enzym or Cypress.

Webdriver IO is an automation framework for Web and mobile applications. It helps you create a concrete, scalable and stable test suite. The main difference between WebdriverIO and the others we went over earlier in this article is that it can be used to test hybrid, native mobile applications, and native desktop applications along with Web applications. The whole package! WebdriverIO leverages the power of the WebDriver protocol that is developed and supported by all browser vendors and guarantees a true cross-browser testing experience. It relies on a common automation standard that is properly tested and ensures compatibility for the future. This standard allows WebdriverIO to work with any browser, regardless of how it is configured or used.

Playwright is another automation framework that works best for E2E testing. This framework is built and maintained by Microsoft and aims to run across the major browser engines – Chromium, Webkit, and Firefox.

It’s actually a fork of an earlier project, Puppeteer (which we went over above). The main difference is that Playwright is specifically written for making E2E tests by developers and testers. Playwright can also be used with major CI/CD servers like TravisCI, CircleCI, Jenkins, Appveyor, GitHub Actions, etc.

AVA doesn’t create any Globals for you, so you can control more easily what you use. This can bring extra clarity to tests, ensuring that you know exactly what is happening.

Made by the team behind Vite, Vitest is a native test runner which provides a compatible API that allows developers to use it as a drop-in replacement of Jest in most projects.

Vitest cares a lot about performance and uses Worker threads to run as much as possible in parallel, bringing the best developer experience. It stays lightweight by carefully choosing its dependencies (or directly inlining needed pieces).

This framework aims to position itself as the Test Runner of choice for Vite projects, and as a solid alternative even for projects not using Vite. The team has provided a comparison page which shows you the differences between this tool and the most-used test runners like Jest or Cypress.

Here’s a comparison table consisting of common characteristics of all of these frameworks, to help you figure out which is the best for your specific testing case: 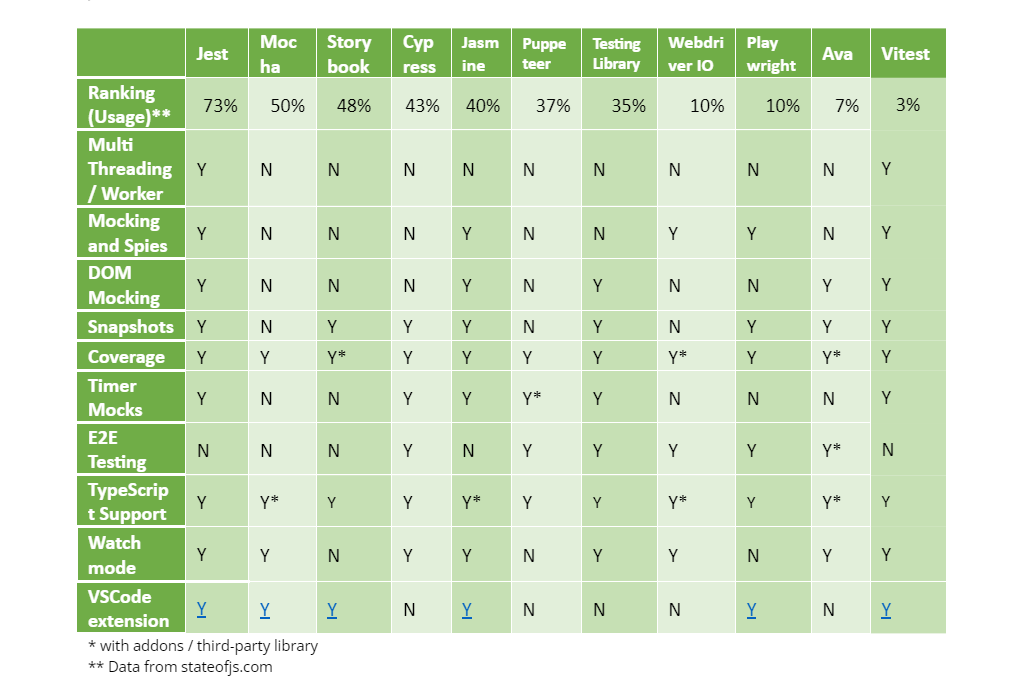 Which JavaScript testing framework should I use?

After looking at just a few of the many frameworks out there, it’s pretty clear that choosing a framework isn’t black and white.

Most frameworks (Mocha being the exception) provide the essentials, which is a testing environment along with the mechanisms to ensure that given X, Y is always returned, with a few simply giving you more “bells and whistles.” So for the basics, you should feel pretty confident in choosing any of them, with any further preference depending on what you and your particular project want and need.

If you’re new to the game and need a lot of help getting up to speed, you should choose frameworks with strong communities like Jest. If you require a broad API along with specific (perhaps unique) features then Mocha is a smart choice, as the extensibility is there. And if your tests are mostly E2E, then you can choose between Cypress, Puppeteer or Playwright.

Please also note that if a library is new and doesn’t have a strong community at the moment, it doesn’t mean this will always be the case. Be sure to check them out from time to time. The JavaScript world is changing every day! Here’s hoping this article helps you in choosing the perfect JavaScript unit testing framework in 2022 and beyond.

A testing framework can help you improve your software quality and catch errors early. To help ensure your JavaScript project is error-free, add Raygun Error Monitoring to your testing - and production - environments. Try it for free! How to connect code to customer - A deep dive into customer-centric monitoring
Apr 18, 2021
END_OF_DOCUMENT_TOKEN_TO_BE_REPLACED